Dstl – or to give it its full name, the Defence and Science Technology Laboratory – needs to hire the brightest minds in the country; however, better-known competitors were taking the best talent.

Penna was called on to develop an impactful campaign to help Dstl reach more people when it was looking to fill more than 50 roles in the Cyber and Information Systems (CIS) division. We had to appeal to a wide audience, showing how innovative and fun Dstl is as an organisation, while highlighting the right mind-set needed to work there. 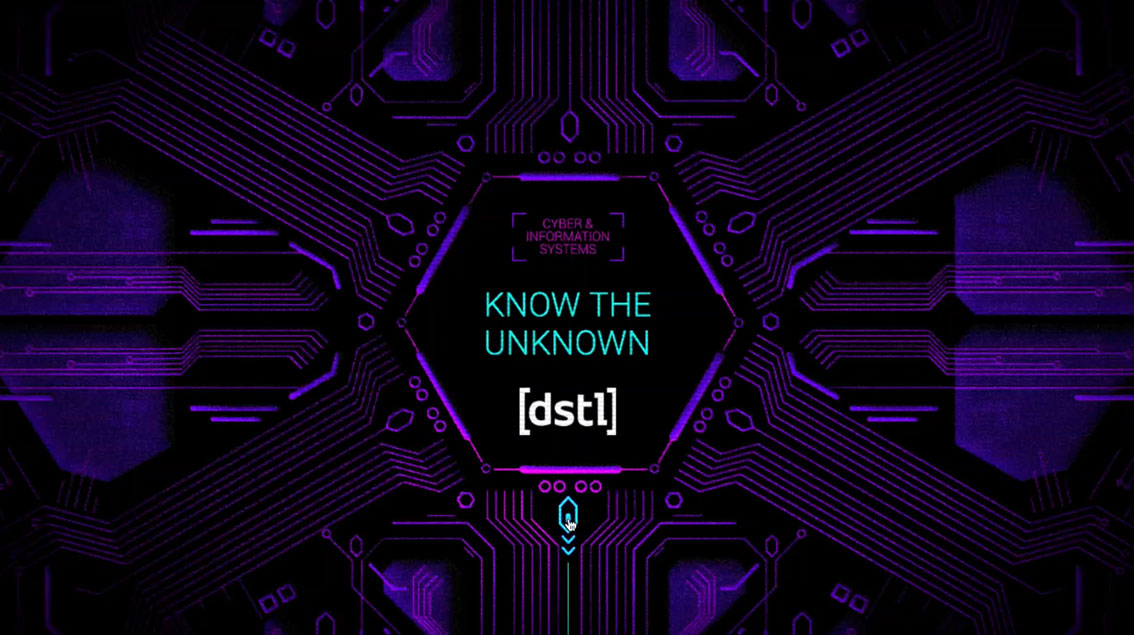 CIS roles call for some pretty specific skills that are less than mainstream. So we developed Counter Threat, a highly engaging, but also fast-paced and stressful, online decision-based game in which you had to prioritise resources to deplete threats – precisely what Dstl does, but without the end-of-the-world consequences of failure!

The accompanying online campaign engaged over 6,000 people, who played for an average of three minutes. The top score of 2,147,483,647 will always remain the top score, as the leaders hacked the game; which was exactly the kind of interaction we hoped for.

We had included an extra challenge within the game, inviting people to mess with the code by hiding some on the cyber page, as well as an audio message signalling that the source was the key and a recurring and intentional glitch. Opening the JavaScript console (aka the source code) and entering a unique cheat code found in the URL gave extra game time and resources, plus exclusive placing on an elite leader board. It also became a personalised code candidates could use in their applications.

Importantly, the cheat code needed to be entered at a specific time; if not, game time was redacted. Additionally, as both the URL and time sequences were uniquely created every time the site loaded, players could only use the code themselves (so no sharing on Reddit!).

All this turned the game into much more than an attraction piece and allowed Dstl to identify which applicants were curious and skilled enough to dig deeper.

The website
The nature of Dstl’s work means there’s not much information about it online. So we included extra pages on the Counter Threat website that informed our audience about the different CIS areas, roles available, benefits and the mind-set Dstl looks for. We also made sure the website had just the right amount of content to excite curious candidates. 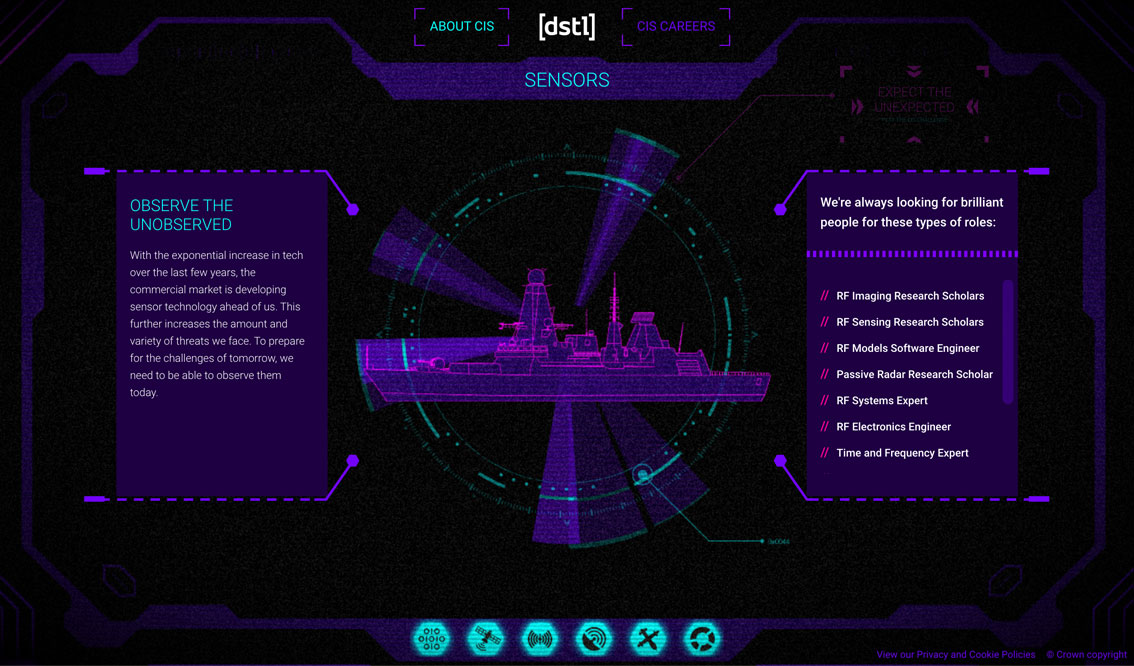 Mobile version
Aware that players weren’t likely to use the mobile version of the site in the same way as a desktop computer, we made specific designs for different devices, rather than simply rearranging content as responsive websites often do. This gave users a more positive experience, regardless of the device they were on.

Social ads
Our social campaign was designed to be completely inclusive, making clear that you didn’t have to come from a certain background or look a certain way; what mattered was that you had the right mind-set. This truly resonated with the 8,700 people who clicked through to find out more. 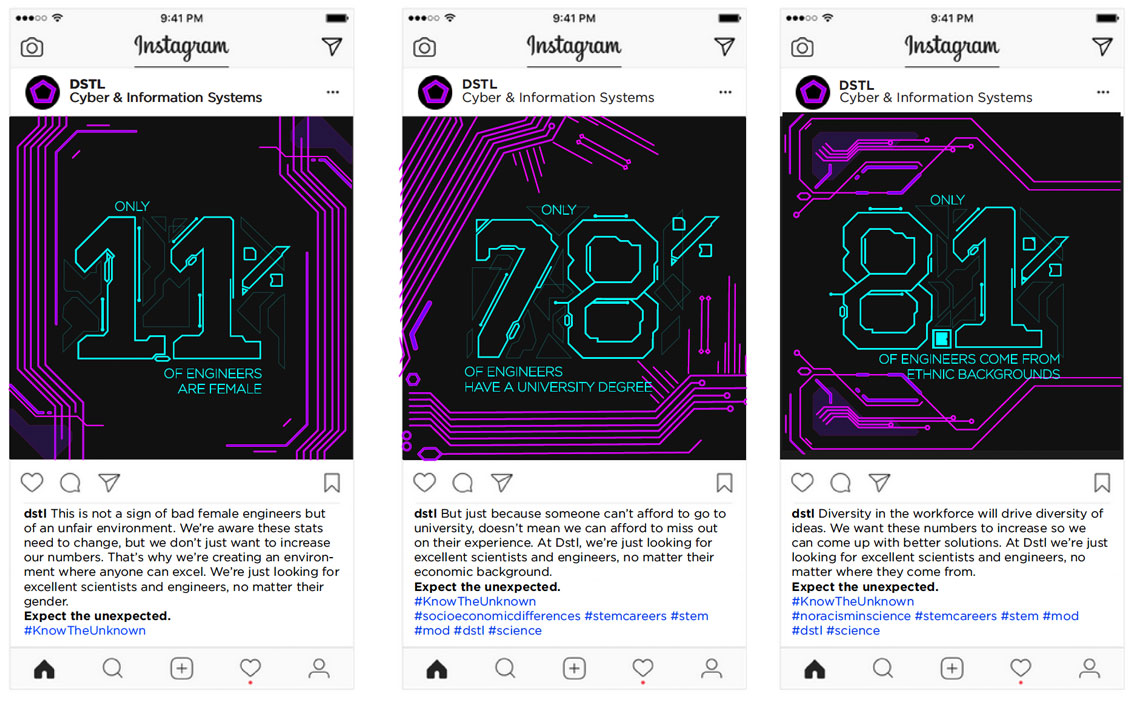 Overall, there were over 100 applications with different experience levels. Exactly what was wanted. Equally important, the quality of applications increased compared to previous more conventional campaigns. In fact, this one was particularly successful in attracting very experienced candidates with niche, hard-to-find skills.

But there was an additional benefit: this campaign had a positive effect on the business in general. The project got everyone at Dstl excited, particularly those in the CIS division. With positive feedback and lots of people playing the game, it raised morale and reminded everyone that they should be proud of the work they do.