Penna’s best performing campaign in Clearing 2019 was for Liverpool John Moores under a contract won in a competitive tendering exercise and started in October 2018. We hit the ground running to plan the strategy for undergraduate main cycle activity in the lead up to Clearing, working closely with the Marketing team and key stakeholders across the university.

Primary objectives were to:
• Generate awareness of the courses available at Liverpool John Moores
• Increase enquiries and applications to 24 academic courses with spaces remaining to be filled across a broad range of subjects from Architecture to Sport

Taking into consideration past performance and needing to measure across all faculties and all courses available to 17-19-year olds, we agreed key performance indicators around course applications, open day registrations and undergraduate prospectus requests. 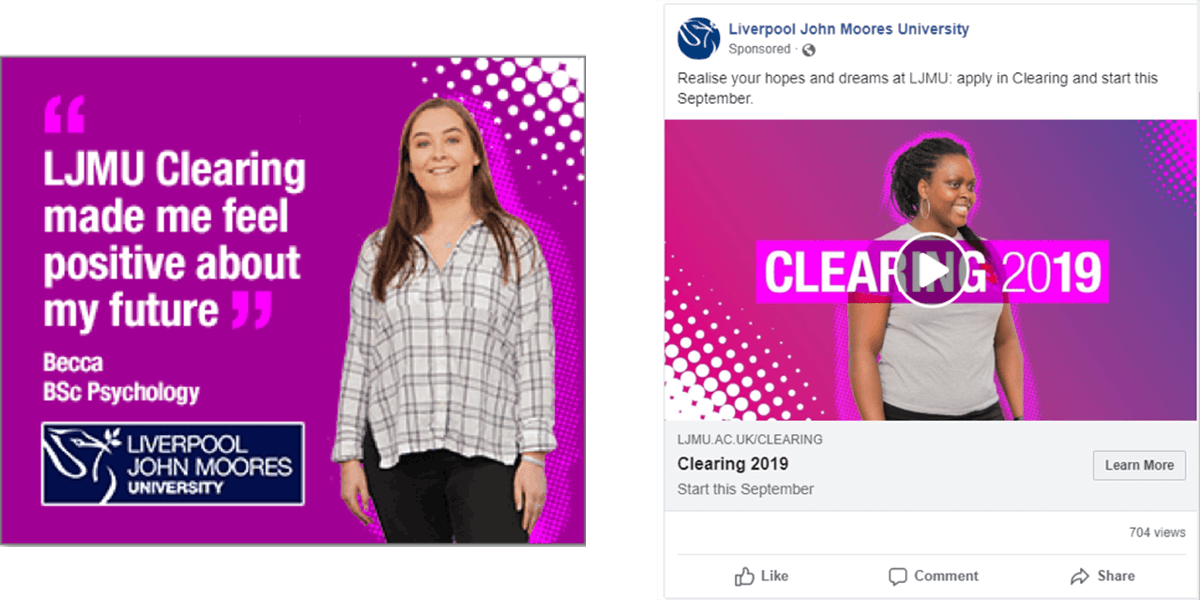 Flexibility was key in our campaign planning with multiple messages being pushed out and content to be switched off and on, as needed. This led to a strategy focused on channels that provided low cost and high return, such as paid search, programmatic and social media.

We used Google’s first party data and deploying course-specific creative messaging we targeted secondary school leavers completing their A-levels based on interests associated with the courses; for example, using premium data segments supplied by the likes of Eyeota, Bluekai and Exelate.

We also maximised our premium deals with UCAS and Times Higher Education, prospecting via audience/data segments, editorial content and private arrangements to ensure a wide reach of a passive audience not previously aware of the courses on offer.

All data was recorded in real-time on a bespoke dashboard accessible 24/7 to our client’s authorised stakeholders. Throughout the campaign, optimisations were made in real time against industry benchmarks for click through rate. Increasing spend in the final week leading up to results day ensured budget was being used effectively when the target audience was most active.

Across its two-month lifecycle, the campaign returned 220 course applications, 189 open day registrations and 78 undergraduate prospectus requests. Serving to inform and give us groups of UK and international audience profiles, we were then able to re-target and ensure that, if decisions had yet to be made, Liverpool John Moores remained front of mind during Clearing. From such detailed data we also built ‘lookalike’ audience profiles to target new hotspots, identified by Penna working in collaboration with our client.

Highest clicks: Social media – Facebook, Snapchat and Instagram
Across both central and faculty campaigns, 20,710 clicks were recorded throughout all social media channels with a CPC of £0.55.

A mixture of carousel, video and standard image adverts helped provide an extremely competitive cost per click against the initial campaign level KPI of £3 CPC or less. The profile video (run centrally) was the best performing asset within the campaign, providing 6,490 of the overall campaign click attraction.

Looking at how the social channels break down in terms of performance, Snapchat led the way seeing 9,629 of the overall social media clicks, followed closely by Facebook with 8,786 and finally Instagram with 2,295.

Highest acquisitions: Programmatic
Programmatic accounted for a third of the overall media investment but drove just over half of the total acquisitions with 6,785 conversions giving a CPA of £3.44, which is significantly better than the overall campaign CPA of £6.24.

Similar to social media activity, programmatic benefitted from a variety of messaging across multiple formats, which allowed for an incredibly healthy acquisition rate.

When you consider that programmatic is primarily used for brand awareness, this level of conversion response is really positive.

In terms of placements where we saw the most conversions, MPUs were the best performing with the top 13 placements for conversion activity within the programmatic platform all being in this particular format. From a subject level perspective, ‘Sport’ saw the most engagement in conversion terms via programmatic, providing 333 across all formats and followed by ‘Criminology’ with 289, ‘History’ with 286, ‘Computing’ with 262 and ‘Health’ with 246 conversions.

Click and conversion heatmaps
• Mobile devices accounted for 63.1% of traffic
• Brand keywords provided a strong volume of conversions, as we would expect, with ‘LJMU email’ providing 915 conversions alone (all attributed to ‘clearing hotline’)
• Student profiles/banner case studies led the way with performance in terms of click attraction

It’s worth noting that for every PPC campaign we run, we divide our targeting strategy into prospecting and remarketing. Remarketing is targeting prospects who have not converted. Either by interacting with a certain page or clicking a button on a site, through Google Tag Manager, the Performance Media Team is able to build audiences based on users’ interactions with the site, but who have not converted. The remarketing in this campaign saw:
• 4,799 clearing hotline calls generated
• 467 click to call conversions from the ads
• 16% acquisition rate
• £6.24 CPA

The outcome proved that, by combining remarketing and prospecting, you can better tailor advertising and achieve much improved results overall than when choosing one tactic alone. This was by far the best performing Penna Clearing campaign with other CPAs ranging from £50-£95. It provided an overall CTR of 0.163% which, compared to the UK industry benchmark of 0.05%, means performance was over three times better.