Promoting the brand to postgraduates

The Natural Resources Institute (NRI) at this University has an award-winning reputation for research but a relatively low profile as a place to study. When it needed to hit recruitment targets for five postgraduate programmes in 2017,  Penna designed a plan to increase global brand awareness amongst prospects and influencers. 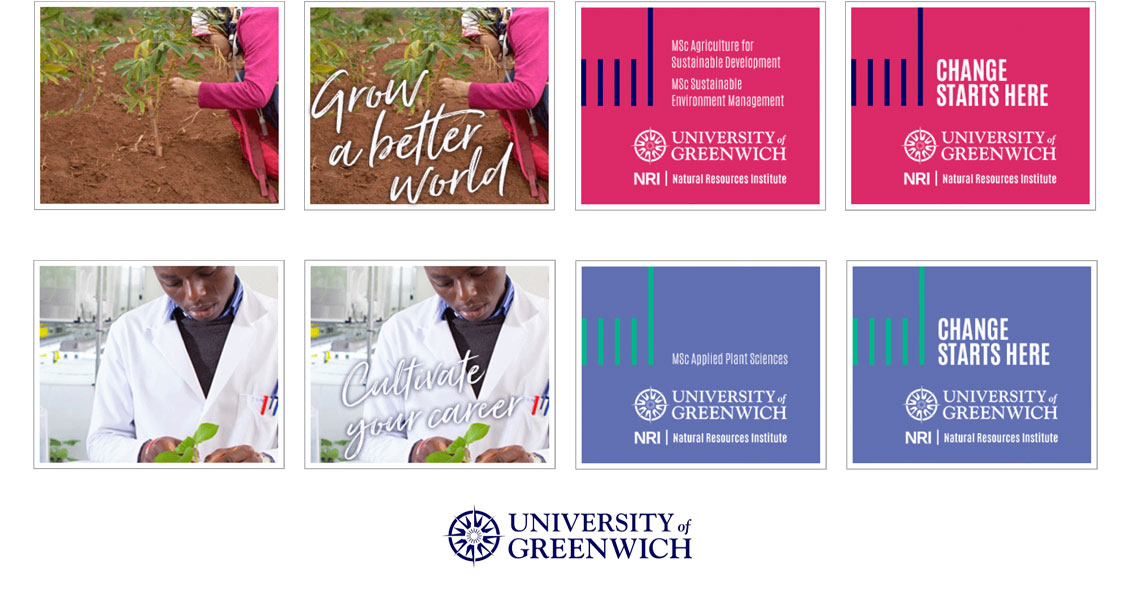 Our first step was to understand the NRI’s target audiences and programmes to help us to spread the budget in the best possible way. First we examined the typical profile of students for individual courses, building personas for each to help identify the most appropriate targeting. Then we looked at countries.
‍
This was the first time the NRI had invested in any advertising activity. With no prior media results to use as a basis for decision-making, we selected channels that had performed well for other faculties in the University in the same markets. We prioritised those where we were confident we could reach the target audience, but that would also enable the Institute to ‘stand out’ from competitors.
‍
Working with a largely unknown brand, it was important to find a way to tell the NRI’s unique story outside of the usual media channels. We decided on a content-led approach using the excellent range of material hosted on its ‘owned’ channels to build a connection with relevant prospects and ensure a high quality response.

Our media solutions included Facebook, programmatic, Tan Media (content-led) paid search and Masterstudies. Each was chosen either to raise brand awareness or generate an enquiry.
‍
Target markets for each course varied but, as well as the usual suspects (such as India and China), they extended to Middle East and African countries including Ghana, Iraq, Kenya, Kuwait, Mozambique, Nigeria, Saudi Arabia and Uganda.
‍
In many locations, applicants were most likely to be based in a limited number of cities and this enabled us to narrow down our targeting and maximise the limited budget. So, for example, paid search was limited to Abuja, Accra, Baghdad, Kampala, Kuwait City, Nairobi and Riyadh.
‍
Facebook proved to be the most effective in terms of traffic generated, followed by programmatic. Across the whole campaign, we delivered over 80,000 clicks to the NRI’s landing page with three media (Facebook, programmatic and paid search) fulfilling their role of attracting traffic and generating conversions.
‍
As expected, with an average CPC of £0.11 Facebook was the most cost-effective in terms of traffic; paid search had lower click traffic but generated significantly more interactions with the ‘apply’ buttons, reflecting the actively searching audience that we were reaching. Masterstudies and Tan Media were less successful in generating click traffic and conversions in terms of quantity, but delivered exceptionally high engagement levels. This was especially true in Middle-Eastern countries, such  as Iran and Saudi Arabia.
‍

NRI saw a 20% uplift in applications to all of its programmes for 2017 with the most pronounced increase being from the PPC targeting generated in Abuja, Accra, Baghdad, Kampala, Kuwait City, Nairobi and Riyadh.
‍
Interestingly though, increased applications also came from the UK: Southampton, Inverness and Dublin being just three major centres from which NRI welcomed an increase in 2017 entrants.

This was convincing evidence that this first advertised activity of courses at this standalone faculty of the University of Greenwich successfully raised brand awareness of NRI and its entire portfolio both here at home and overseas. This is now ongoing with current activity ensuring NRI is maintaining its reach and growing application numbers.